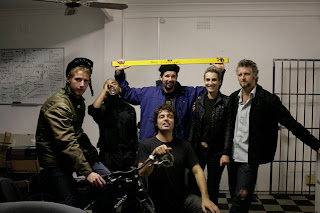 Posted by theweathergroup_U at 8:09 PM No comments:
Labels: two members missing-Dan and Jeremy. 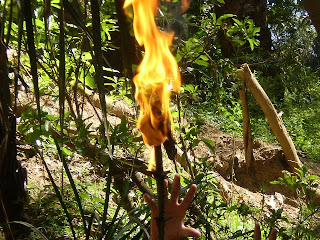 Posted by theweathergroup_U at 3:49 AM No comments:

Theweathergroup formed for this and future projects to further develop themes arising in previous works by Susan Norrie and David Mackenzie (Twilight 2005, Havoc, 2007) on the way diverse human cultures understand and respond to changes in their natural environment. The central idea that brought us together is the weather: as something we communicate about everyday, as an object of traditional and scientific knowledge practices, as our sensual experience of the natural sublime. Weather was something which was once seen as regular and beyond our control, a point hammered home by rare Acts of God. Now, because of our burning technology, the weather is becoming chaotic. This requires us to monitor and co-operatively control our effects upon it. Linked to this interest were images of lightning, of the Promethean forces of nuclear industry re-awakened by climate change, and a concern that, even in the context of ‘Sorry Day’, a lot of Aborigines see the continuing NT Emergency Intervention as a dissolution of hard won and limited indigenous sovereignty.

As Carolyn Keller has observed, talking about the weather used to be innocent. It was the kind of conversation that you could have with a stranger on a bus, in order keep to small talk and avoid the taboo subjects of politics and religion. “It looks like rain”, “it’s a hot one today”, “funny weather we’re having.” Now, when all are familiar with the revolutionary transformation of the earth’s climate by our industrial economy, talk about weather has lost its innocence. “The foreboding feeling of irretrievable and unforeseeable damage reverberates in the brief silences, as we nod and shake our heads, break eye contact, change the topic.” Indigenous people have long observed the interactions between plants, animals and weather cycles and their meteorological knowledge. For pre-industrial peoples, talk about the weather was a question of survival and prosperity. As it has now become also for us in the era of climate change, Westerners are realizing the accuracy and value of ancient weather knowledge, grounded in long botanical experience, for this new turn in the history of weather prediction.

Tim Flannery has warned that Australia faces "the most dangerous situation arising from climate change facing any country in the world right now." The weather is the medium that links the worlds’ peoples to their unprecedented alteration of the biosphere. It is also the medium of unjust outcomes. Those of us in ‘consumer society’ contribute most to the problem. Those who contribute least, indigenes living on their own country in their own way, are most exposed to flooding, storms, sea rise, and disturbing changes in the ecosystems they have always understood and lived with. They are also least able to access the goods and services that the well-off will use to insulate themselves from extreme weather events. As colonized people, they are often excluded from decision making that directly effects their ability to maintain cultural survival. Local struggles over land are increasingly linked to international power politics, shaped by global corporations and market forces, and framed by scientific discussions of environmental change. The work documents Jefferey Lee’s struggle to assert his traditional ownership, under huge pressure to allow uranium mining on the Koongarra lease in Kakadu National Park, an area known for generations of local Aborigines as ‘sickness country’.

In April 2008, United Nations Permanent Forum on Indigenous Peoples was hosted in Darwin by the Northern Australia Indigenous Land and Sea Management Association. The topic of the international conference was ‘Indigenous Peoples and Climate Change’. The WeatherGroup attended and filmed the public discussions, where we heard the testimony, reflections and debate of delegates from places like the Phillipines, Samoa, Alaska. We heard stories of pressure on forest livelihoods, of rising oceans and biopiracy, of ice melting so rapidly that it stretched the ability of traditional knowledge to read the once icebound coastal environment. We later took candid interviews with the conference attendees, interviews that often belied the diplomatic goodwill of UN decorum, and that led to new possibilities in the work.

Here we encountered Dean Yibarbuk, a traditional owner of Arnhem Land escarpment country and began exploring the Western Arnhem Land Fire Abatement project (WALFA). Dean is part of Wardekken Land Management Ltd., one of 6 organizations of traditional owners employed as rangers on their own land from Bulman to Maningrida. Funded for 17 years in a deal with US energy giant Conoco Philips to ‘offset’ CO2 from their huge new gas-fired power plant in Darwin, the project is re-igniting the traditional practices of controlled burning, although adding in helicopters, landrovers and state-of-the-art satellite mapping systems. In abeyance in remote Arnhem land as people have become confined to missions and towns, cultural burning practices are being revived. As they reduce the intensity and spread of the dry season bushfires, they also reduce the amount of CO2 released to the atmosphere. It also enables autonomy and the reconstitution of culture ‘on country’, supporting the aims of the ‘outstation movement’ among those Arnhem land people who wished to leave the missons and return to living on country. The status of a full time wage enables an escape from dependence on changing welfare regimes – of which the intensive income management of the NT Emergency Intervention Act (2007), for which the Racial Discrimination Act (1975) was partially suspended, is only the most recent and the most all encompassing.

People like Violet Lawson, Dean Yibarbuk and his Wardekken Rangers exemplify the way the knowledge embedded in indigenous law and practices of land use is entering an exchange with Western ecology and climatology, and this is a two way street. In a 2003 response to the extended drought, the Bureau of Meteorology began a project to document and interact with traditional weathermen to increase the accuracy of their understanding of Australia’s seven seasons and long range weather cycles by linking it to biodiversity. They also represent, in the midst of great change, the coming together of a world community, constantly communicating about the Weather.

On communication, there are more than 50 remote outstation communities in Arnhem land where there are fewer than 50 people, where there is no stable power supply, phonelines or access to internet. Often this informational remoteness has been seen as an obstacle to community development and participation in broader society. Frustrated with government studies that consume funds and don’t provide access, Bryce designed and built the ‘e-gipsi’ - a mobile, solar powered, satellite phone and internet connection that cost less than $7000 to build from available parts. E-gipsi’s are already in operation in some NT communities, fostering microbusinesses in weaving or translation, enabling communication between communities and the outside world. Strangely enough, Bryce reports that often the first thing Arnhem-landers look up when the internet connected, is the weather predictions of the Bureau of Meteorology…. 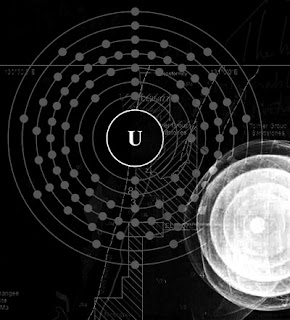